A couple of weeks back I downloaded Curtain Call, the sequel to Theatrhythm Final Fantasy, a rhythm game by Final Fantasy creators Square-Enix on the Nintendo 3DS. While I admit to not having the played the first installment, apparently the major differences between the two are the available songs as well as the inclusion of a multiplayer mode (which I won’t be reviewing). (1) The premise behind Theatrhythm is that the forces of the gods Chaos and Cosmos are at odds and Chaos is disrupting the music crystal born out of “rhythmia” or “music waves” which need to be restored. This takes place through stages in which the player must tap along to the rhythm of songs selected from various Final Fantasy titles. These are categorized between Field Music Stages, Event Music Stages, and Battle Music Stages (FMS, EMS, and BMS) and correspond to the nature of the song used in that particular stage. For example, a battle theme would be used as the song in a BMS. Simple enough.

My immediate response to the gameplay in Theatrhythm was delight. I anticipated that the songs used in the game would be remixes only to discover that I would get to play along to the original versions of the songs. This enhanced my feelings of nostalgia while playing, as I could remember the songs as they’d appeared in their respective games. Curtain Call offers 221 songs (not including DLC) available in-game (1), spanning an impressive amount of soundtracks to choose from (I’m looking at you, Mystic Quest). Most of these songs can be unlocked via progressing through music stages and acquiring “rhythmia” which functions a sort of reward currency that you accrue at the end of each stage. I’ve noticed I’m unlocking something at every 250 rm milestone and the breakdown for the points seems honestly kind of random to me.

During a stage, notes appear on the screen and line up with a placeholder and depending on whether it’s an FMS, EMS or BMS the notes move in different ways. You can interact with the stage in time with the music by tapping the screen or pressing any button when a note lines up with its placeholder (think Guitar Hero or DDR). It’s possible to combine playing styles and there’s even a one-handed method of playing that involves the use of the L button and the control/slide stick for only the most skilled drivers out there the multi-taskers who don’t want to miss a beat. I mostly enjoyed the implementation of notes with directional arrows inside of them, requiring you to either swipe your stylus or move the control stick in a particular direction, effectively serving as the most challenging aspect of the game when approaching the higher difficulty levels. It successfully breaks up the monotony in what would otherwise be your run-of-the-mill portable rhythm game– which often rely on more notes at ridiculous speeds to introduce difficulty. A little disappointing is the fact that you can still be graded on failed stages if you make it far enough in them. This made me a bit less determined in completing a song I failed at, especially as it’s possible to get a B and still fail. 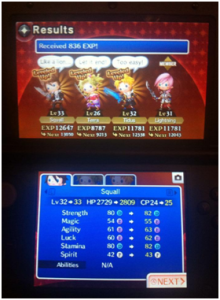 Touting itself as a rhythm game with a touch of action, Curtain Call is generous in its RPG elements though that’s all they really are: elements. You can select from over 60 characters (1) from various FF games and assemble the party you use to partake in the music stages. The characters even possess stats, gain experience, and level up as you play. While there are advantages to using certain characters (for example, a character high in “luck” might not take as much damage if you miss notes), they only marginally influence the outcome of a stage so I found myself really ignoring that aspect altogether. That’s the thing about the rewards in this game; they are so numerous and feel so disproportionate. For everything I attempted I felt I was being bombarded with fifty unique mentions of having unlocked this crystal, that crystal. Red crystal, blue crystal. It’s obvious that a lot of thought was put into making CC as replayable as possible, but there are so many things to do and because of it I found it hard to relate what I was doing to what I was getting as the result. I get the impression that it would take some serious FAQ-studying to try and unlock the things I’m most interested in but the completionist in me is tired. There is, however, a “Museum” feature in the game where you can view your stats and overall completion, and if you think you’ve made significant progress you’re probably poorly mistaken.

If you’re looking for the perfect game to play while commuting, look no further as I can safely surmise that you will be able to play Curtain Call for forever. If you’re an avid fan of video game music, chances are you have some appreciation for the music of the Final Fantasy series, but don’t let the cult appeal scare you off if you’re not. There’s plenty to offer here for any rhythm game aficionado, but the personal connection I have to the songs in this game is the reason I’ll be more inclined to pick up and play Theatrhythm this fall over Hatsune Miku: Project DIVA or even good old Elite Beat Agents. Consider it a supplement to your usual finger-tapping habits next time you’re listening to music on the bus. The amount of choice I had in developing my own style of playing and having so many modes of play to choose from is a major contributor to the kind of experience that I think Theatrhythm is: a personal, nostalgia-filled finger-tapping trip that anybody can dive right into. Kupo!