Bravely Default Review and “The Womanizer” Character Trope in JRPGs

For Valentine’s day I was gifted with a copy of Bravely Default. Released by Square Enix this game is the “spiritual successor” to the 2010 Nintendo DS game Final Fantasy: the 4 Heroes of Light. It is interesting that Square Enix has chosen to follow a nearly identical formula, with the characters for each game barely distinguishable.

Bravely Default has received a fairly positive reception from most gaming new sources and has been quite a success for Square Enix.

Some highlights include the fantastic battle system, the immersive environments, and the charming voice acting. I also really enjoyed the job classifications and the organizational structure of the items and abilities. The game was also well thought out and explores grinding in a new way. The configuration options allow you to change the difficulty and frequency of encounters throughout the game.

I would recommend the game to any JRPG fans out there. But I want to take this blog post to talk about something that has been bothering my for awhile now, today’s topic is “The Womanizer” trope in JRPGs. 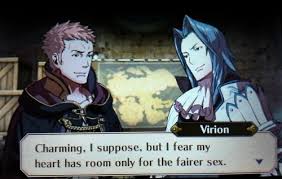 “The Womanizer” is a phrase I’m using to describe a male character who’s primary focus is his sexual interests and either comes off as a romantic who cannot control how much he loves women, or an innocent voyeuristic pervert. Now I’m sure this trope exists in western games as well (it is pretty common) but I would say the trope occurs in most JRPGs and a lot of anime as well.

However, I wanted to critique some of the character tropes that I encountered playing Bravely Default. The first character you encounter that begins the sexist and inappropriate banter is Ringabel, your party’s resident Casanova. 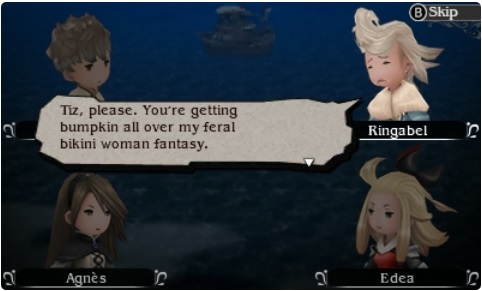 Ringabel is a wanderer who has lost his memory, he seems to be able to tell the future by reading out of a mysterious journal. He is a super interesting character, but much of that complexity gets over shadowed by the fact that 90% of his dialogue is about trying to seduce women. In fact every time you travel to a new location this character has to inquire if there will be any women there. Not to mention the character drops unwanted sexual advances on the female characters Agnes and Edea for the majority of the game and at times makes references to watching Edea sleep.

However this is not the extent of sexist character tropes that exist in the game and this womanizer trope isn’t the only one I want to point out. The very first villain you encounter is the monk, Barras Lehr, who is accompanied by white mage, Holly Whyte, whom he continuously refers to as “woman.” 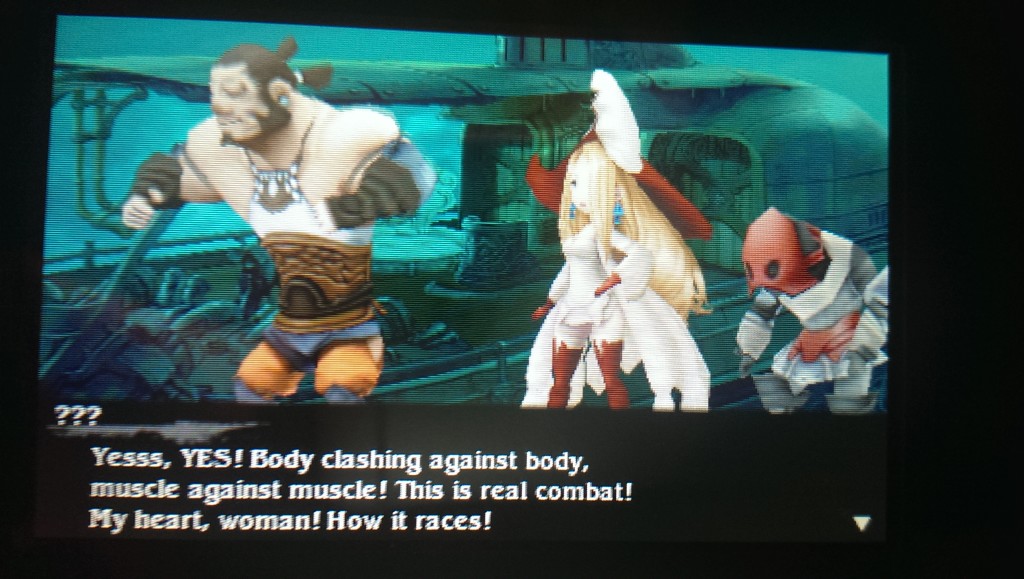 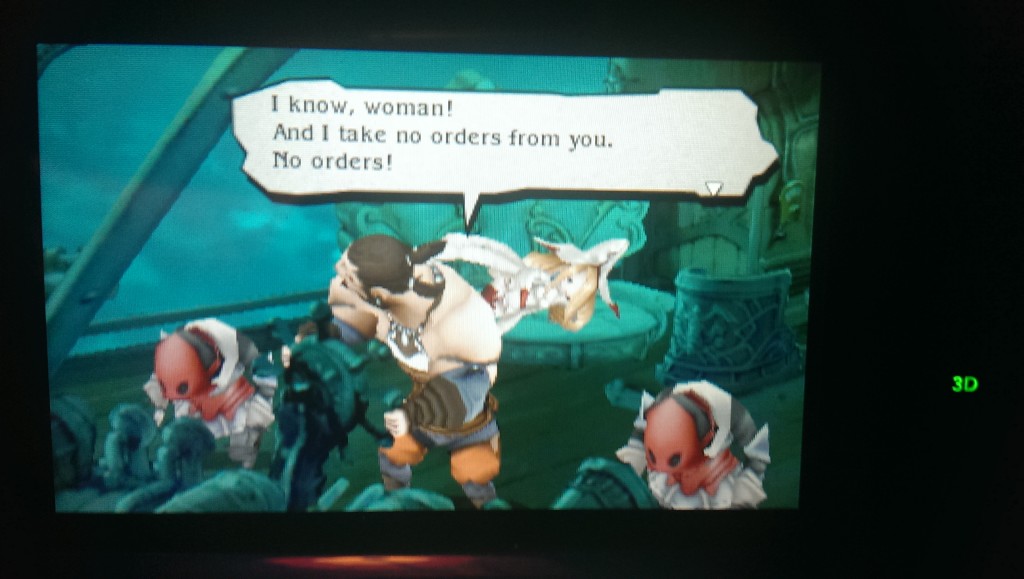 Referring to a colleague by their gender identity is reducing them to that identity and showing that they are not to be viewed as a full-fledged human. Using “woman” as an address enforces patriarchal beliefs and limits women’s participation in society; it’s offensive and sexist.

Also making generalizations over an entire demographic is prejudice, for example, a black mage who consistently discredits an officer’s abilities based on their gender. 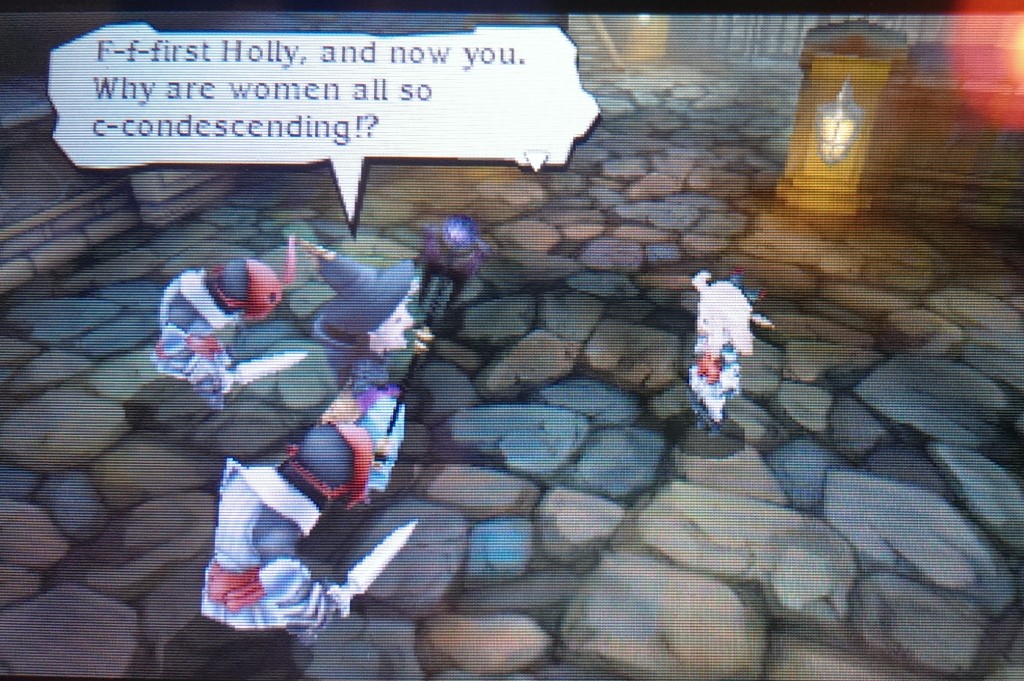 Finally the last character I want to spotlight is Sage Yulyana, who blatantly and inappropriately pushes sexual advances towards the female characters. It is intended to be comedic, as he is a lonely old man living in a cabin in the woods. However I felt the invitations to his bed and comments on the implicit “jiggle” of Agnes breasts was too forward. 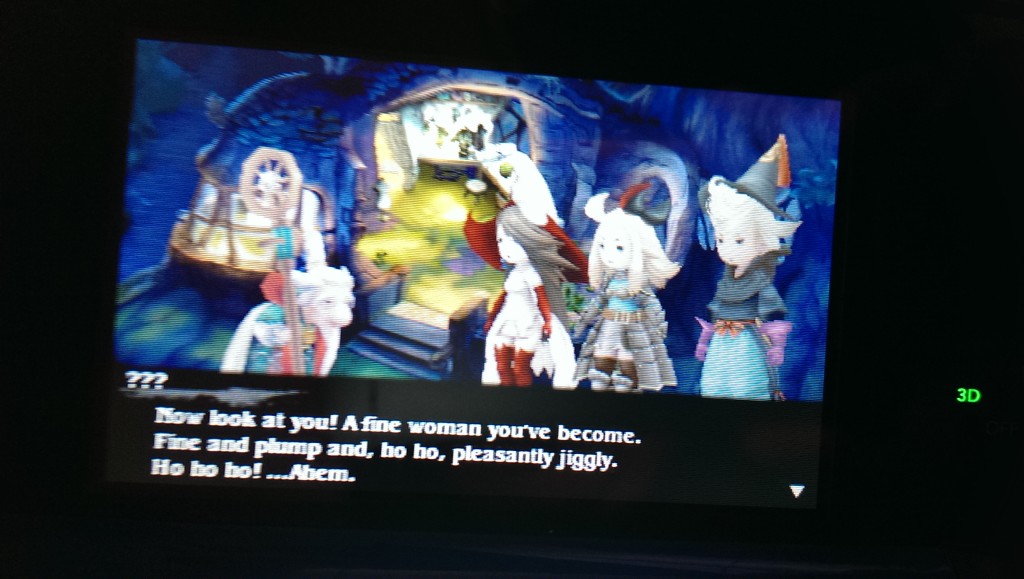 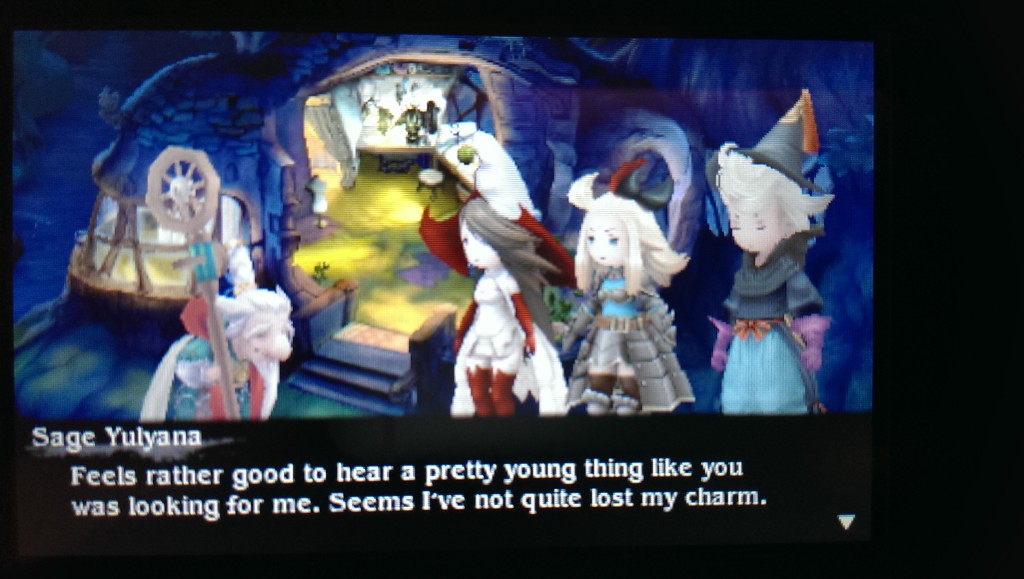 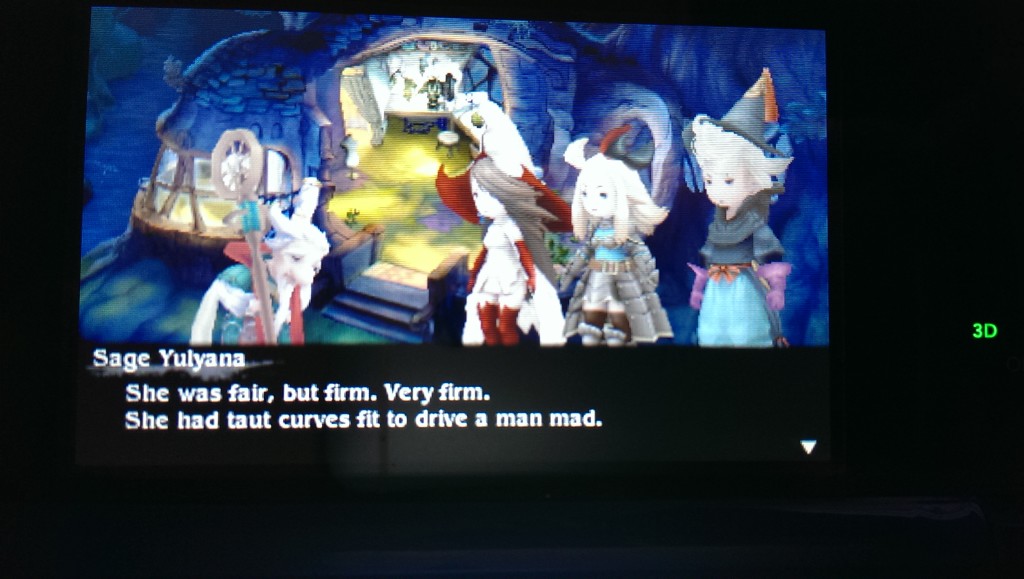 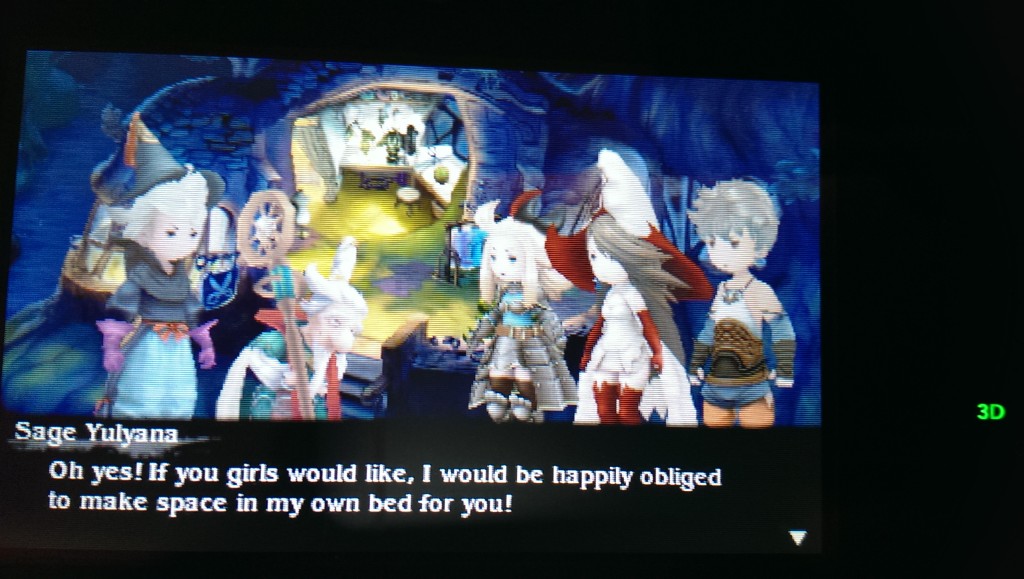 And finally, no sexist character is complete without a line resembling “go make me a sandwich.” 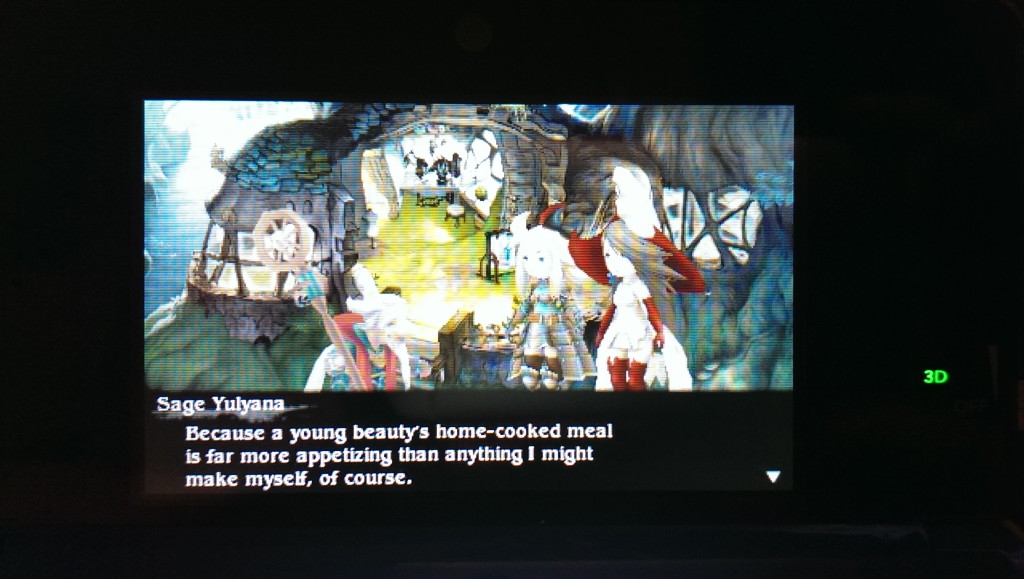 So aside from making women feel uncomfortable while playing the game (as if that isn’t enough reason to exclude those gross bits of dialogue) lets talk about why glorifying the pursual, objectification, and acquisition of women is harmful for our society and how these tropes fetishize and normalize this.

Now Bravely Default is not the first piece of media to explore these tropes. 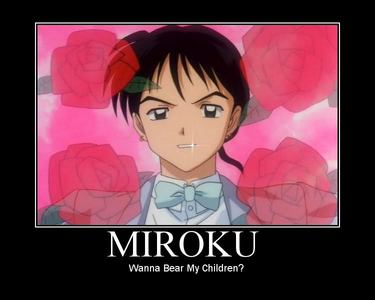 I would argue that these character tropes are pervasive in a lot of Japanese media. For example Ringabel can be compared to Miroku from the anime, InuYasha. Miroku consistently asks every attractive woman in feudal era Japan to bear his children. If that wasn’t creepy enough, this character is also known to get in a butt-grope whenever possible.

Taking a step back, I want to talk about what is really going on here. This is fiction, but it is also depictions of sexual harassment and assault. Touching a woman without her consent is sexual assault.

Another example, paralleling Sage Yulyana, is Jiraiya, the mountain toad sage in the anime Naruto. 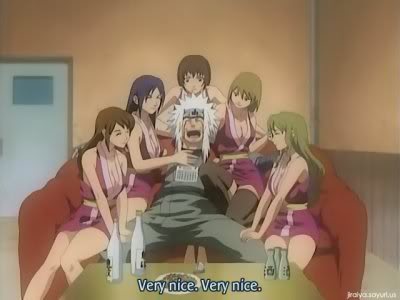 This character is known to act as a “peeping tom” and try to get a glimpse of naked women in the hot springs, and is jokingly nicknamed the “pervy sage.” However “peeping tom” is legally defined and non-consensual voyeurism is sexual assault and punishable by law.

Upholding “perverted behaviour” as uncontrollable and innocent propagates rape culture in our society. It creates conditions where it normalizes the assault and harassment of women. If you interested in reading more about rape culture, I have previously posted about it here. A lot of this behaviour is excused by the assumption that “boys will be boys” or that males cannot control their violent or sexual tendencies. Soraya Chemaly wrote a great article entitled The Problem with ‘Boys will be Boys’ that deconstructs this phenomenon beautifully with a story about her preschool aged daughter.

I am not saying that all boys with bad manners, poor impulse control, ADHD or other behavioral issues will be rapists or abuse spouses. I’m saying the world would be a different kind of place if children were taught to respect other children’s rights from the start. Rights to be, to do, to look certain ways and not others. And that teaching children these things has profound implications for society. Anyone who has studied or worked in the field of domestic violence can tell you that the “overarching attitudinal characteristic” of abusive men is entitlement and the belief that they have rights without responsibility to or respect for others. Similar attitudes feed our steady stream of sexual assault and rape.

I believe part of that is altering the media that children, young adults, and adults consume. Glorifying male characters that respect women and treat them as equals will provide positive role-models for boys and men and hopefully create more allies when it comes to standing up for women’s rights and deconstructing rape culture. Personally, I would really like to see games and other media move away from using the same stale tropes to get a few laughs. Especially in the case of Bravely Default, the game was visually and narratively gorgeous. It was also written with elegance and I found the sexist aspects took away from the over all feel and enjoyment of the game.