Review of Calgary Expo 2015: Women in Games Panel and Other Cool Stuff

I firmly believe that getting out to a convention a year, especially for those who work or live their free time in geekdom, is extremely cathartic. Over April 17-20th I attended Calgary Expo as an annual tradition. Calgary Expo is the second largest convention in Canada and had upwards of 100,000 attendees in 2015, so you can imagine there is plenty of diverse activities and niches for all types of nerds. I am going to be focusing on my experience of the advocacy panels I attended as well as my own experience speaking on the Women in Games Panel.

In my search for knowledge, new media, and enlightenment I stumbled across some amazing panels. I want to highlight some of the panels here and talk about how they relate to game studies and feminism.

Drawing Herstories, with Taryn Mahoney, Leah Schmidt, and Sarah Dorchak is a panel touching on the history of women in comics, alternative representation of women in comics including lesbian and indigenous representation, and underground comics. This panel was presented by three very well spoken women of academia and was aimed at an academic feminist audience. I really liked seeing this content at Calgary Expo, it isn’t very often that feminist panels at conventions get to touch on more than “feminism is a thing, women should have rights.” However this panel presented rich material about women in underground comics and dove deeply into the underappreciated herstories in underground comics. The panel was moderated by one of the host’s of CJSW’s feminist radio show “Yeah, What She Said” and a full recording of the material (recorded prior to the panel) is linked above. The kind of herstories presented in this panel are something I long for in speaking about women in games; too often we get wrapped up in arguing about issues of harassment and marginalization instead of highlighting the amazing indie material female developers have been producing for years. Attending this panel was a cold bucket of water dumped on me that highlighted my own tendencies towards reactionary style journalism when blogging about women in games.

Men of Cosplay with Sunday Cosplay, Henchman Props, Nathan DeLuca, Michael Hamm, and Ryan Brandt. This panel was really awesome! The premise of this panel sounded super cool to me, and I know nothing about cosplay so I was eager to learn. The men on the panel discussed a variety of topics including how they got into cosplay, poor costume choices, their family’s reactions to cosplay, and getting hate online. The content was really interesting, the video game references were rampant, and the panelists were forward thinking and knowledgable. From a feminist perspective some highlights included talking about gender bending and the differences in sexual harassment between being a male and female cosplayers. For me this helped me think more openly about gender issues from a male perspective in fandom and it was uplifting to see such awesome men standing up for alternative perspectives on gender and representation.

The Indie Author Road with Adam Dreece was another panel I attended. Adam Dreece is the author of “The Yellow Hoods” a female positive indie fantasy novel. He presented two panels at the con, Indie Author Road and Things to Think About When Writing Strong Women, I attended the first. Adam was energetic and realistic. He emphasized how distribution methods for the mediums we consume have changed and reviewed some challenges and benefits of being an indie author. These kinds of talks are extremely important and directly map over to the games industry. First, games are also a form of literature so many of his writing tips apply. Secondly, distribution structures for games are also changing, which means the demographics of who is a developer or writer of published games are changing. By providing indie producers, writers and developers with tools to help them market their materials we diversify the market and allow more experiences and voices to be heard.

Some other notable panels I attended were a panel on Controversy in Geekdom which talked about doxxing, sexual objectification, and cyber bullying. I also attended a Geek Girl Gathering session where we met some cool people, learned about initiatives to get more women into comics, gaming, and other geekery, as well as ate free pizza and won door prizes! I won a copy of volume 1 of Lumberjanes, a comic about five teenage girls fighting yetis (if you are into comics read this it is awesome). 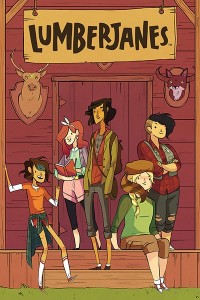 I’m writing this part of the post in response to the MRA/GamerGate booth controversy. In summary, a Men’s Rights and GamerGate group was given a booth at Calgary Expo. The group was expelled from the conference on Friday morning and asked to take their booth down and leave the premises.

Calgary Expo has released a full statement on the issue.

I do not personally know the comprehensive or official reasons why this group was expelled from the con. The Mary Sue covers the story well in a full post here.

The only thing I would like to touch on is the use of the word GamerGate. Please do not approach any woman centric panel with the guise of addressing “ethics in games journalism” and say you are part of GamerGate. Women in gaming do not want to engage with you and will feel endangered by your presence, this ensures no hope of an intelligent discussion taking place. This is a direct response to the massive amounts of harassment that women have received from the GamerGate movement in the past year. They are completely within their right to remove you from a space. Especially taking into account that GamerGate has become so terrifying that they have threatened to bomb women in games panels, they have threatened school shootings, they have doxxed women, and threatened them out of their homes. Therefore if you associate with GamerGate, regardless of your position or intentions, you appear as a threat. GamerGate is the mark of a terrorist organization.

Finally lets talk about women in games and the Women in Games Panel, which is in its third iteration. In 2014 myself, Maren Wilson of Women in Game Studies, Stephanie Chan of Women into Comics, Karin Weekes of Bioware and Susan Wright of Infinite Monkeys spoke about how to introduce women to game development and design and issues women face in gaming. This year Maren was unable to make the con so we had Kristin Lindsay of Penny Arcade Expo fill in.

The highlights from the discussion included the usual talking about how to get into making games. This is the part where we always encourage people to participate in Global Game Jam and other Hackathons. As well, there are always questions about where to attend school and what to take. To this I say, look up game development and design programs at your local Universities (or ones abroad) and don’t shy away from computing science!

We also spoke briefly on GamerGate, acknowledging the above about harassment, but also how it is important not to shy away from these conversations. We also talked about how we each got into gaming and I tried to encourage more women and girls to participate in esports.

The conversations that occurred in Calgary gave me insight into a lot of issues I haven’t thought about before, and inspired me to research a couple different topics. Therefore keep your eyes on the blog for some upcoming content about esports, how to get into development and learning some more difficult games to get into.

Finally the last point I want to write about is failing. Women often find it very difficult to find their place and stay in gaming communities because they are less skilled or feel there are greater expectations for them because of their gender. It is also worth acknowledging that everyone was terrible at some point and failing is a crucial part of getting better (this applies doubly in gaming.) So keep playing, keep trying, and keep failing. ðŸ™‚