Ladies I Have Loved: Recent League Characters (Gendered Survey of League of Legends Champs Follow Up)

Way back in August of 2014 I wrote an article that was a survey of League of Legends champions from a gendered perspective. Since then Riot has released some new characters that answer the critiques I made.

My other article ended with the desire to see more female champs that are non-humanoid, more humanoid champs of colour, less sexualized or fan-servicey skins, and more female Tanks and Fighters (and more male Supports).

Since August 2014 the following champions have been released:

Looking at the champions released since 2014, we can see a couple of interesting things. 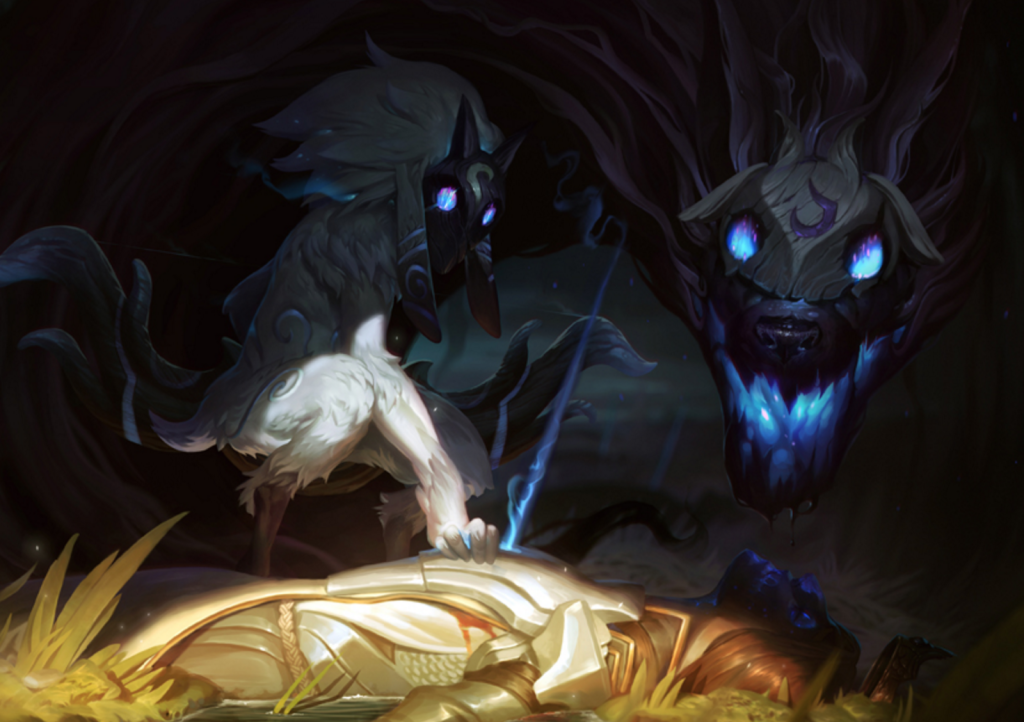 Also, I would like to add a special nod here for Kindred who may possibly be the first intersex character. The character is actually a combination of two parts, the wolf and lamb, who have different genders. The character still falls into some sexist tropes where the lamb is female and the wolf is male and they are often considered two separate entities.

Kindred is the white embrace of nothingness and the gnashing of teeth in the dark. Shepherd and the butcher, poet and the primitive, they are one and both. – League of Legends Wikia

However the part I want to address, and I’m not really sure whether to applaud or critique, is the fact that Riot used the pronoun “they” through the background article for Kindred on the League of Legends wikia, which is an accepted singular pronoun, but returned to using his or her when talking about the entities separately.

Lamb’s silvered bow and her arrows will lay you down swiftly. If you refuse her, Wolf will join you for his merry hunt, where every chase runs to its brutal end. – League of Legends Wikia

I really, really, really want to see a game company do a gender fluid character without reverting to the crutch of gendering two separate parts, or chickening out and not using “they” as a singular pronoun consistently.

Stats collected for my prior article:

My categories of human, humanoid, and other were based on my own subjective analysis of the characters bodies. I tried to approach it with some rubric, human is typical human proportions, with typical human limbs and facial structure. Humanoid were clearly non-human characters that had human face structure and characteristics (for example Nami the mermaid character) or characters that have compressed anatomy like Poppy, and Tristana. Other were characters whose anatomy is drawn directly from animals or other influences, this includes characters that are beastial or have gaseous bodies.

This is interesting because considering the UN’s prospects of world population distributions we can assume that the world is less than 30% white. As well, considering Riot games has offices in over 12 countries worldwide and players in even more, they are responsible for catering to a large and diverse fan base, so I think it’s really great that they are making an effort to increase the diversity in their human characters.

On Ekko and Illaoi

I want to acknowledge the characters that they have released, because I think they have done a really good job of creating an interesting foil to avoid stereotyping. 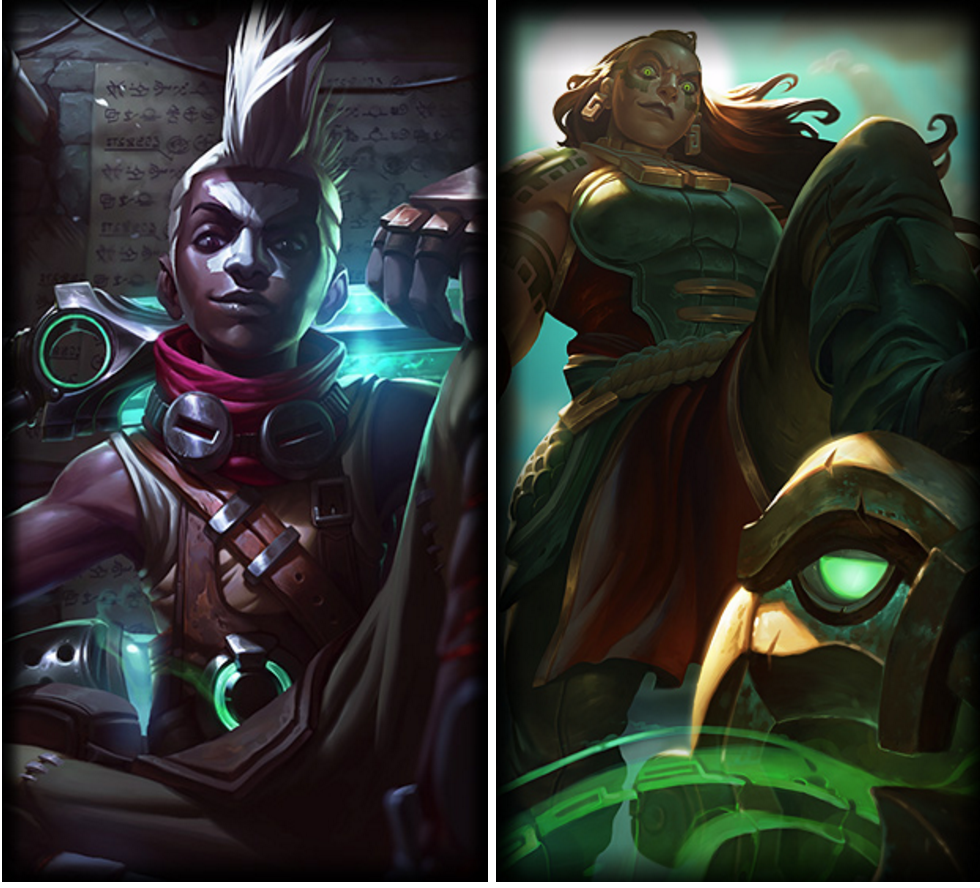 Ekko and Illaoi are both people of colour with almost contrasting beliefs, ideologies, and abilities. I will make a chart to illustrate:

Also a better shot of Illaoi is in game, because her splash art white-washed her. ðŸ™ 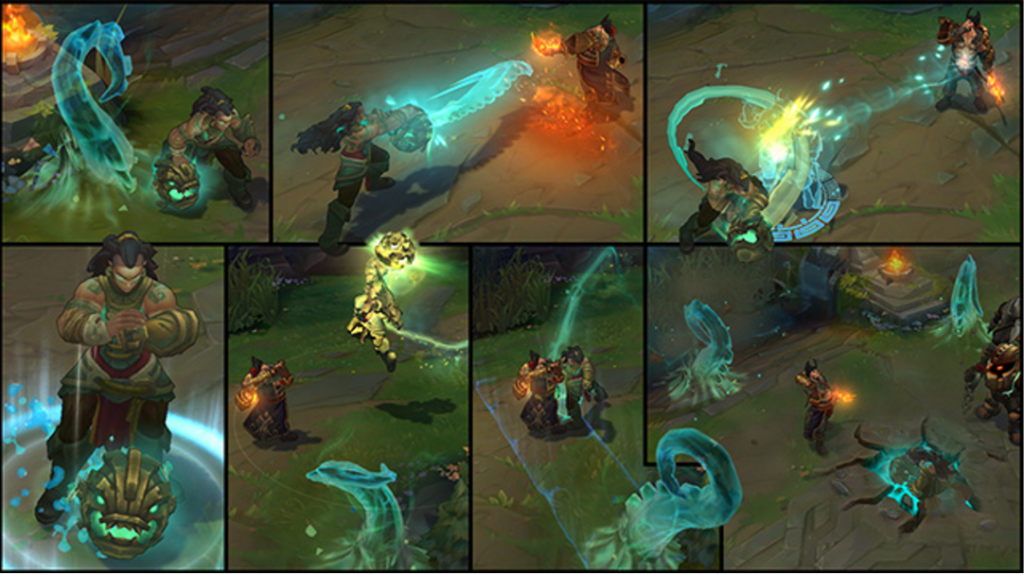 I feel like these characters were made in direct opposition to each other, particularly because the influences are very different. I think that both are amazing additions to Riot’s champion line up and have deep complex backgrounds that many people with diverse backgrounds can relate to.

On Non-Humanoids (Rek’Sai the shark of my heart)

This. This is the 100% increase in non-humanoid females. 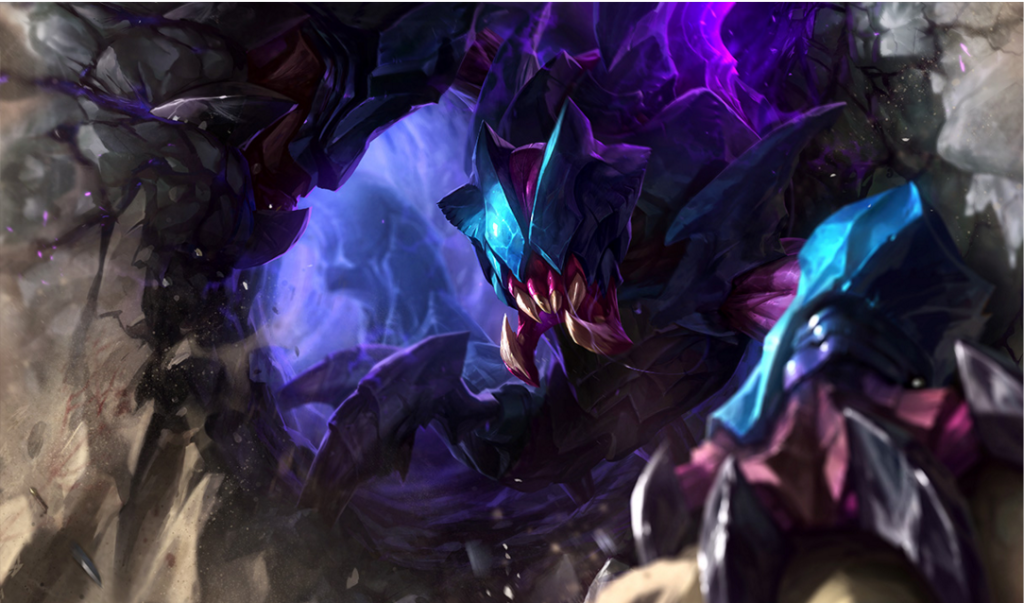 BUT I think Rek’Sai gives us more than just another female monster. She is an unforgiving, teleporting desert shark with a fucking mandible. Boo yah. The first line of her bio sums it up.

The largest and fiercest of her species, Rek’Sai is a merciless predator that tunnels through the earth to ambush and devour her prey. – League of Legends Wikia

Rek’Sai is important, she exhibits unfiltered dominance, something we so rarely see given to female characters. She is depicted as something to be feared, a depiction that is unmuddled by sexual confusion. Frightening female characters are too often depicted in media as someone that the audience (presumed straight male) should be attracted to. She is like the Queen Alien from the Alien series, except without the focus on reproduction. Arguably there are many similarities between Rek’Sai and an ant queen, but the fact that she is without minions or offspring is important because it creates this powerful loner character that is not something female characters are usually portrayed as. Rek’Sai is awesome.
So to conclude on that note, I think Riot has made so much progress with their character design in the last year and a bit, and I’m so happy to see new champs coming out. For the future I would like to see more people of colour, more non-humanoid female characters, and more trans and non gender binary characters, and characters of different sexualities.