A Survey of League of Legends Champions from a Gendered Perspective

The following is a statistical analysis of the League of Legends Champion’s character design from a gendered perspective. In this analysis data was collected directly from the champion profiles listed on leagueoflegends.com/champions. Data is valid as of Aug. 6, 2014, where I surveyed 119 champions, each having between 3-10 alternative skins.

League of Legends is a massive open battle arena, or MOBA that allows characters to choose from 119 champions to fight team matches with anywhere from 5 to 10 players. I was originally drawn to the game by the readily available choices of strong female characters, but as I started playing more frequently I began to question the actually distribution of male to female, and the representation of such characters via their official artwork and skins. So out of curiosity I set out to gather some stats. I recorded the champions gender, their appearance as one of human, humanoid (human body and aesthetic with non-human features), or other (modelled of an animal or abstract concept), the percentage of skins with an exposed stomach, the percentage of skins with an exposed chest, and the class(es) of each champion. 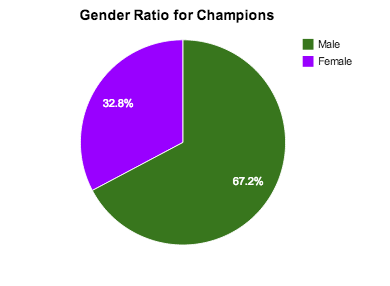 My first observation was the ratio of male to female champions. Let it be noted that all champions have their gender specified on their profile page, and no champion does not have either male or female specified.

In the league there is currently 78 male characters and 38 female characters, making the league only 33% female. So at just over 1/3 female I was curious about the distribution of human/humanoid/other over the male versus female ratio.

Humans, Humanoids, and Others 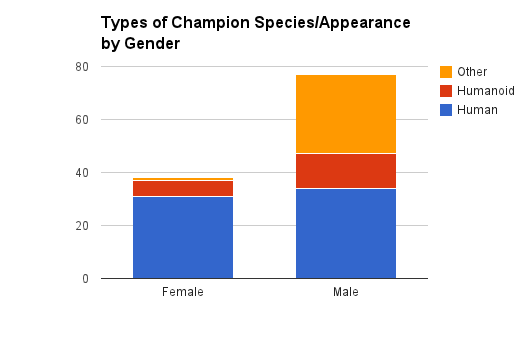 whose anatomy is drawn directly from animals or other influences, this includes characters that are beastial or have gaseous bodies.

There are many characters that wear heavy armour or are entirely covered (for example Amumu the mummy character) where it is hard to tell what kind of anatomy exists under the costume, but I tried to categorize these characters based strictly on their proportions.

Based on the stats collected of the female characters, only 1 (Anivia) classified as non-human (bird anatomy) every other character that fell into the category of “Other” was gendered with masculine pronouns. This includes characters like Blitzcrank the robot, Maokai the tree monster, and Thresh a reaper; all three of which are specifically gendered in the lore section of their champion page.

It is also interesting to note that the distribution between male and female is nearly 1:1 if you exclude the “Other” characters.

The next statistic I collected was the amount of skin showing for each character specifically if their stomach or chest was bare. I thought this was relevant not only from a gendered perspective (because people have had issues with costume design for female characters in fantasy games in the past) but also from a perspective of practicality. In League of Legends the costume design has zero influence on the stats of the character and thus is purely reflecting the cultural and aesthetic desires of each individual character and thereby the culture and values of the artists and developers and Riot as a company. Of the 119 characters I surveyed every current skin available on the champions page (this obviously excludes special issue skins like the PAX skins), of these skins I calculated the percentage of exposed chest and stomach per character and separated them based on gender. 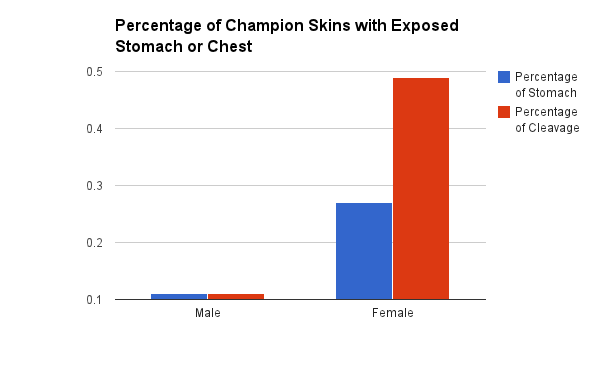 Exposed chest counted as any kind of cleavage (v-necks on men, and front or side cleavage on women), exposed stomachs counted as anything where the navel or most of the sides or front of the stomach was bare (heavy stomach armour but bare chest would be a 1 for chest 0 for stomach.) As well non-human (other) characters I counted as 0 in cases where they had non-human chests/stomach or fur covering any trace of human anatomy, and 1 if they had a human body with an animal head (for example Renekton).

My results are posted to the right. Of all the characters men had a bare chest or stomach in around 11% of all skins, where as women had a bare stomach in just under 30% and cleavage in nearly 50% of all skins. That is a lot of boob. So much boob. This is a bit difficult to digest, as these characters are warriors and regardless of their personality or clothing preferences they are all objectified. The only female character (aside from the non-human Anivia) who scored 0 on no cleavage and no stomach in any skins is Kayle.

What I found nearly as disturbing as the quantity of overall cleavage was the clear use of male gaze in all of the revealing and non-revealing costumes. I actually debated on adding another metric for skin-tight top to bottom or nipples-through-shirt, because nearly all the female characters had multiple skins that would’ve checked off this metric.

Fetish Skins and the Male Gaze

First lets start by defining “The Male Gaze”, from wikipedia, in her essay “Visual Pleasure and Narrative Cinema”, “Laura Mulvey introduced the second-wave feminist concept of “male gaze” as a feature of gender power asymmetry in film. The concept was present in earlier studies of the gaze, but it was Mulvey who brought it to the forefront. Mulvey stated that women were objectified in film because heterosexual men were in control of the camera.” So when applying this concept to video games, we are stating that women are being objectified in the skins and character designs due to the game industry being dominated by the ideologies and perspectives of male developers, artists, and players.

Using this specifically to talk about character design in League the male gaze is vividly apparent in the disproportionate sexualization of female characters. Most obviously in the use of what I will call “fetish skins.” My definition of fetish skins are skins that are costumes but are sexy versions of what ever the costume is. For example, if we look at the “Officer Caitlyn” skin and “Riot Graves” skin there are obvious similarities. One, they are both dressed as law enforcement, they have similar poses, a similar colour scheme, and are both wielding a giant gun. The difference is Caitlyn’s costume is the sexy-fetish version of law enforcement, while Graves looks as though he could competently complete the task of law enforcement in the outfit he is wearing.

This is a common occurrence. The female characters are frequently shown in costumes that fetishize a profession. A couple more examples are Forecast Janna and Headmistress Fiora. Both show ridiculously busty versions of women in professional positions that are design to reward the player with a sexual fetish. This reduces the female characters to sexual objects, and these images tell players that the appearance of their bodies are rewards. This also tells players that they do not have to take women in these professions seriously because they are merely playing dress-up for their sexual satisfaction, they are not meant to be capable competent professionals.

Another theme in this fetish trend is dressing the female characters in cliche sexy-animal costumes. This is clearly disempowering female characters to reward the player with their favourite champion as a sexual fantasy. Also there is a long history in feminist theory of devaluing women by equating them to animals. And more here. This is called dehumanization and makes a privileged group feel less guilty (and sometimes justified) about treating an oppressed group poorly. Here are a couple examples of what I mean, Battle Bunny Riven and Kitty Kat Katarina. Only the female characters are dressed up and fetishized in this way.

Another common gender disparity that follows along the above themes is what I’m going to call “holiday skins”. They exists as a seasonal treat for players. Also male and female champions have holiday skins, but the difference between the two is blaring.

And there is many more holiday skins for female champions than male champions, most of which are sexualized. Such as the HeartSeeker Valentines day series of champion skins.

Finally there was one example I could find that I would classify as an intentionally sexy male skin and I want to talk about why it is a little different from the sexualized female skins. This is Pool Party Graves:

Pool party graves looks like a direct reference to when Hugh Jackman was named sexiest man alive by People Magazine. 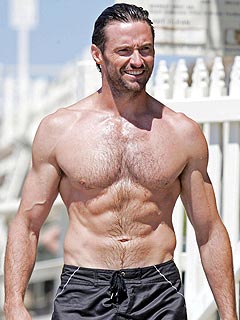 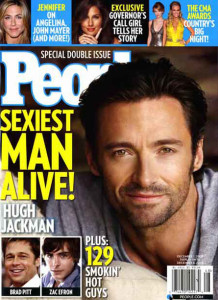 Now lets break down why this is sexy. Graves has rippling muscles, chest hair, a manly beard, and he is lightly sprinkled in the essence of pool-party. If men want to obtain this physique they have to stop shaving, starting working out at least two hours a day, get some sun, get good at water sports, and eat a ton of healthy foods. That actually sounds like some positive things to strive for, and hey you might not be genetically pre-disposed to look like this, but if you want to try, the process might make you a stronger, and healthier person.

Lets compare this to the default skins for Miss Fortune and Caitlyn (marksmans who play similarly to Graves).

These are their default skins. They are sexy. Women are sexy by default. Now lets compare this to the break down of Graves.

They have no rippling muscles, no hair anywhere but on their heads, ultra-feminine make-up, and they are lightly sprinkled in the essence of a strange glossyness like rub-on-sparkles and massive amounts of cleavage. If women want to obtain this physique they have to shave everything, start doing cardio for at least two hours a day, get no sun ever, get massive breasts, and eat less than what your body needs for calories. These are not positive things to strive for, and you will never be genetically pre-disposed to look like this, but if you want to try, the process might make you a horribly unhealthy.

This doesn’t hold up a positive standard for women. 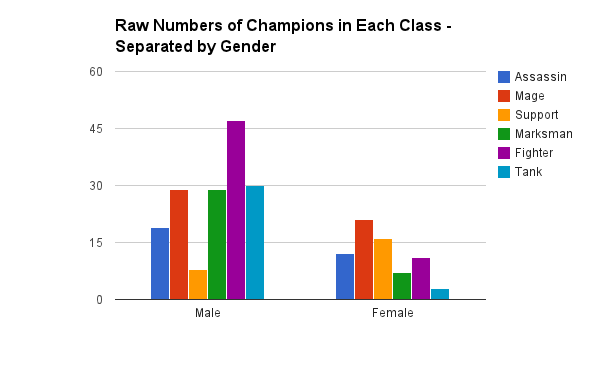 Most (but not all) champions have 2 classes. Curious of how these classes were distributed across the characters so I recorded them and found and interesting distribution.

When we look at the percentage of classes of all characters separated out by gender its we get the following two pie charts. 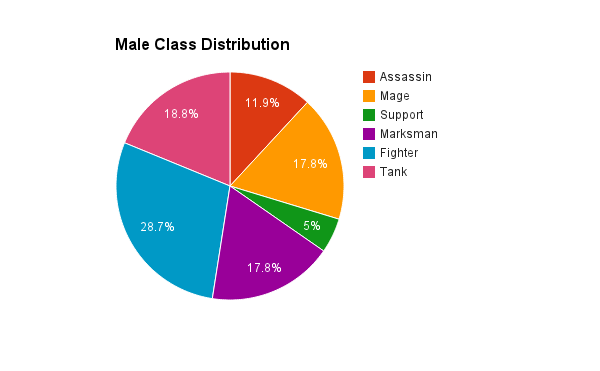 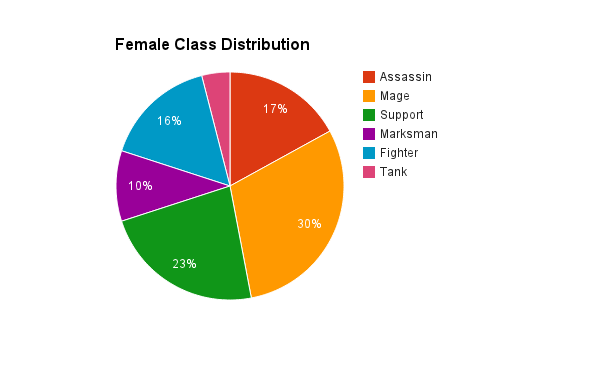 A critique I want to acknowledge is the exclusion of massive amounts of legacy skins. I felt it was only manageable to stick with the official information and skins currently listed on the League of Legends homepage. As well as there are many male characters that have bare chests with overly-prominent abs that are also very thin and this is not a healthy body type to glorify either. Diversity is good and diverse representations are necessary to make all people feel loved and included. Another critique would be my exclusion of a conversation on race. There are many different races represented in the League, however there only exists two clearly non-white human characters, Karma and Lucian. That is also a startling observation that would require another 2000 word post to deconstruct.