The Suspension of Disbelief in Games and the Female Body

Last week we read an interesting post on costume design that discussed the concept of sexiness and the relationship between gender and costume design in games. The article addressed the “suspension of disbelief” in the context of clothing practicality verses sex appeal.

First of all, making a costume sexy in the conventional way (less clothing = more sexy) (hereafter shortened to “sexy”) can reach a point of diminishing return. The less coverage there is on a combatant character, the more it stretches the suspension of disbelief for the part of your audience that cares about that sort of thing. Trading believability for “sexiness” is basically guaranteed to alienate some viewers.

The above statement makes the assumption that individuals of a certain gender possess a unique threshold of believability when viewing a representation that has the same gender identity. Alternatively saying that this threshold is lower of someone who does not identify with this gender. For example, do male identifying people have a higher tolerance of exaggerated features in male or in female representations? If so, that it can be argued that the male focused paradigm for geek-culture will be less sensitive to hyper exaggerated females, and therefore female consumers are alienated by the perceived ridiculousness of that gender representation.

In a blog/lecture entitled “Why are Women so Critical of Each Other?” Rosjke Hasseldine examines why women are more hyper critical of members of the same gender. “Competition and jealousy are natural reactions when women are set up to survive in a culture where they are not equal to men. Sometimes the misogynist behaviour between women can be explained (but not excused) as an act of benevolence where women teach each other the rules of survival because they don’t want them to face the consequences of breaking the rules.” If this subtle yet intense competitiveness necessary for female survival is extended to include women’s tolerance and sensitivity of other women’s bodies it can be assumed that women’s threshold for the “suspension of disbelief” for female game characters will be much lower than the male threshold.

However even if the idea that women are hyper critical of other women is entirely discarded, there still remain major representation issues with most games and comic books. For example many sites have surfaced addressing the disregard of practical anatomy to emphasize a character’s sex appeal.

This is a redraw of one of Rob Liefeld’s more grand anatomical slips. By sacrificing a functional spine for added “sexiness” Liefield’s work painfully points out the seriously impossible standards women are held to. Liefeld has widely been criticized for his anatomically inaccurate style of art, but these contrived, and impossible feats of flexibility by our heroines spine’s are not uncommon. They are so common in fact, that an entire blog entitled Escher Girls, humorously named after the surrealist, has dedicated upwards of 125 posts a month for over 2 years to images of these anatomical anomalies. 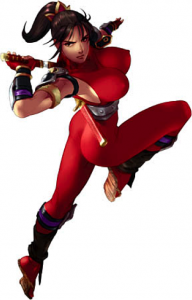 So relating this back to the concept of “suspension of disbelief” can we still argue that women are more sensitive to unrealistic body types then male identifying individuals. When we consider why believability is being sacrificed I think we completely nullify that assumption. For example, most of the concept art for Taki from Soul Calibur III looks this way; this is also a very common pose we see in anime, manga, and comics. The emphasis in these depictions is obviously of a very sexual nature, and the woman is actually contorted in an inhuman manner to depict the maximum sex appeal. So someone viewing this image who is not sexually attracted to the attributes emphasized here, probably will notice the unnatural state of the anatomy, therefore giving the illusion that the “suspension of disbelief” for women (who are disproportionately sexualized) is much lower than that of men.

My personal belief is that we suffer from a combination of these issues. Women are hyper critical of each other, women’s bodies are portrayed as surrealistic in more cases than other genders, and heterosexual women are more likely to notice anatomy than sex appeal in these types of images. Therefore the “suspension of disbelief” threshold can be considered lower for women observing female representations.