The year is 2012 and humanity has stumbled into a distant future in which gaming has migrated, in practice, from a hobby to be enjoyed in the public spaces of arcades to the isolated confines of our mother’s basements. Children no longer save up their allowance only to have it be liquidated quarter by quarter by a beastly computer ordained with twinkling lights and familiar adventures.

So, what does this mean about the way we as gamers view these spaces and thereby the culture of gaming?

Now lets talk about Wreck it Ralph. This is a recently released animated movie centered around an arcade and the after hours interactions between the fictional protagonists and antagonists of the arcade franchises. However, after seeing the movie it seems myself, and others of my generation experience a general disconnect when accepting an arcade as a space in which games are consumed and enjoyed.

Now the creators of Wreck-it-Ralph are trying really hard to incite a fond nostalgia for adults in this movie, proving their efforts with a complex process in which the designers were required to make the game representations “more 8-bit”. In an interview with New York Times, the director Rich Moore, 8-bit art specialist Wayne Unten, and the film’s producer Clark Spencer all spoke to the Times about how, “much care went into recreating the 8-bit feel of the game, which takes cues from Nintendo’s 1981 sensation, Donkey Kong.”

Disney even went as far as creating a playable 8-bit version of the game and created a real life arcade game modeled after the machines of our past. 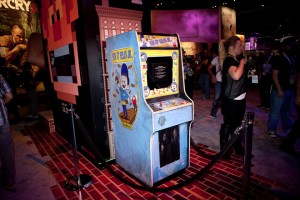 However this game also graces us with some modern twists. Something interesting to consider is how the recreated arcade space differs from the actual arcades of the 80’s and how a the representations of these spaces shape the perception of someone who has never been to an arcade (the younger audience of this movie). 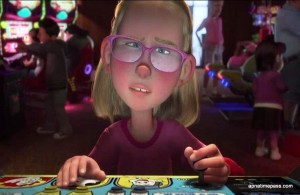 Gaming has evolved in several ways, it has become a more private past-time and thus it has become more expensive to afford consoles and games.

Most people have access to the internet/a computer at home, but even these things cost far more than the quarter an old arcade machine used to take. From this it would be interesting to consider how these game spaces have influenced the audience that consumes a game and from there we can directly identify privilege in our society.

The impact this evolution has had on the game industry is astounding, and in our more home-based game atmospheres arcades (in the same wave as video rental stores) have become obsolete due to the swift advances of technology. But arcades offered us something special, a social element, an element of accountability, and a visibility that gamers now lack.

So bringing this back to Wreck-it-Ralph, thank you for recreating this arcade, and the social environment that festered within. It would be interesting if this nostalgic look-back on the arcade could create a desire to recognize the value in social game spaces and the accountability that comes with gaming in a visible way.