Let me start this post by saying, Fire Emblem Awakening is one of the best RPGs games I have ever played. Ever.

If you have never played a Fire Emblem game then stop what you are doing and go do that. Right now. Seriously.

This post is not intended to be a review, think of it more as a feminist critique/review hybrid. The purpose of this blog post is to think critically about the representations in Fire Emblem Awakening and the dependency on gender in one of the new features it explores. This would be the mechanic of marriage, reproduction, and lineage.

Firstly lets talk about gender representations in the game itself.

Here are some highlights: 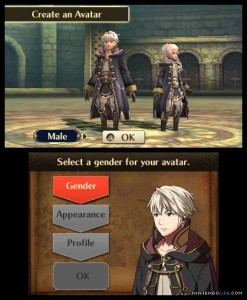 This character creator is very linear but I found it very enjoyable too!! Highlights were the ability to change the maturity of your character’s appearance, as well as their voice actor. The costume also doesn’t deviate much between male and female so it reflects a very practical and gender neutral idea of clothing. 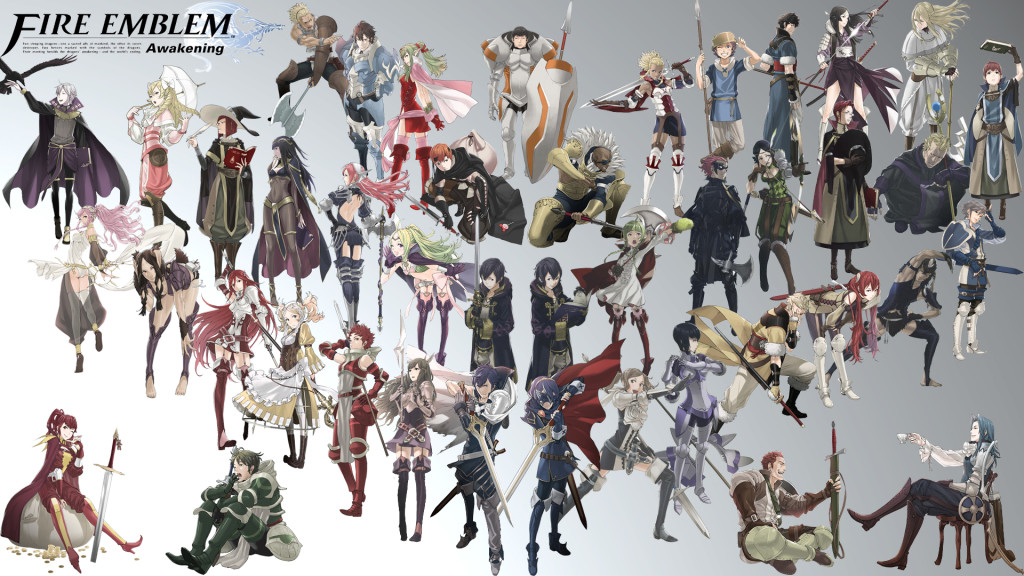 I’m not sure if this is mandatory because of the marriage mechanic, but the male to female character split in the game is nearly 50/50 and the amount of outstanding female characters (that are central to the plot) is shockingly good. 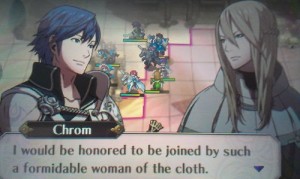 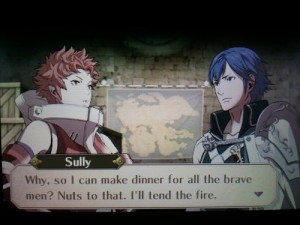 I really liked the characters Libra and Sully. The are representations of individuals that present as a defined sex, but have qualities that show diversity of gender. SO Libra is a feminine man, and Sully is a masculine woman.

Why is all this important?

In real life gender and sexuality are fluid. There are many types of gender presentations and having that diversity represented in the media shows society that alternate gender presentations exist and are acceptable. Under-representing a demographic in the media reinforces stereotypes and lowers self esteem. It makes the marginalized population feel abnormal, when they are not. It also limits opportunities for those individuals, whether it be through stifling ambitions with a noticeable lack of relateable role models or assist in propagating the same favoritism in hiring practices through employer’s own warped prejudices.

Miss Representation has been exploring this argument for years!! Jennifer Siebel recently did a TEDx Women talk about the effects of media on women and girls. And Marie Wilson, from the White House project, famously said “You can’t be what you can’t see.”

Right. So just having women and gender variant individuals in the game is important. But the next step is to critically think about the actions of these characters and the structures that they must abide by. The particular structure I want to address is the mechanic of marriage.

And this is really where the SPOILERS start.

Fire Emblem Awakening implements a new mechanic of marriage, where when two individuals marry you are able to unlock a paralouge chapter to gain a new character. The new character you gain will be that couple’s child. This mechanic is not necessary to complete the game, and there exists some characters that are unable to marry and produce children. However it does enforce a climate of heteronormativity.

So lets talk about a heteronormativity. What is it?

From the Gender and Education Association:

Heteronormativity is a term used by social theorists in order to discuss the way in which gender and sexuality are separated into hierarchically organised categories. It has become one of the most important ways of thinking about sexuality within the academic study of sexuality. Theorists have argued that a discourse or technique of heteronormativity has been set up, and subsequently dominates, social institutions such as the family, the state and education.

Heteronormative discursive practices or techniques are multiple and organise categories of identity into hierarchical binaries. This means that man has been set up as the opposite (and superior) of woman, and heterosexual as the opposite (and superior) of homosexual. It is through heteronormative discursive practices that lesbian and gay lives are marginalised socially and politically and, as a result, can be invisible within social spaces such as schools.

Back to Fire Emblem, lets summarize the basic outline of the feature!

This says volumes about how we perceive relationships!! Subtle, seemingly arbitrary decisions to implement this feature actually propagate a heteronormative agenda and place women into traditional gender roles. I really really liked Fire Emblem Awakening, and maybe next time they can try something different to improve upon their awesomeness.