I finished playing Bioshock Infinite this summer, and I have been mulling on the game for some time. I was really impressed by the art and story of the game, it was deep yet concise, and had me engaged. But I am most critical of the things I love, so here are some of my quick thoughts on the narrative and gameplay.

I talk about the narrative start to finish – including the ending!!

BioShock Infinite is a first-person shooter video game developed by Irrational Games, and published by 2K Games. Previously known as “Project Icarus” in development, it was released worldwide on the Microsoft Windows, PlayStation 3, and Xbox 360 platforms on March 26, 2013. BioShock Infinite is the third instalment in the BioShock series, and though it is not part of the storyline of previous BioShock games, it does feature similar gameplay concepts and themes. The game’s concept and setting were developed by Irrational’s creative lead, Ken Levine, who took inspiration from both historical events at the turn of the 20th century, as well as more recent ones at the time such as the “Occupy” protests.

The creator made a game that was very political, however in this quote from Game Revolution, Ken Levine implied that people only see what they want to, and negated many of the political messages within the narrative. (This was in response to white supremacists which makes is all the more interesting, but I’m sad he didn’t take the opportunity to stand up for racial equality)

BioShock had the same thing, where you had Objectivists being infuriated by it, and people more on the left thinking that it was a love letter to Objectivism. I think these games are a bit of a Rorschach for people. It’s usually a negative Rorshach. It pisses them off, you know?

… If they’re about anything, they’re about not buying into a single point of view. About having a lack of confidence in anything. They’re not ever an attack on a single idea. It’s a bit of a plague on all your houses.

However, I would argue that everything that gets released into the world has context, it has history, and it has bias, because nothing exists in a vacuum.

I want to make several points in this blog post, that Bioshock Infinite, was indeed a treat to play, but does draw on and reinforce various stereotypes and beliefs held in society that reinforce systemic racial, gendered, and cultural oppression.

Addressing politics and religion and reinforcing apathy as “cool”

My second pet-peeve with the political and religious under tones of the game is that your character, Booker, cannot give a single care about any of it. Also Elizabeth has lived her life in a freaking tower so she also gives no cares about politics. You interact with the game as a party completely detached from citizenship and politics until thrust into the middle of it.

Daisy could be sooo amazing, and the narrative starts in an amazing place. She is the leader of the black liberation front under the name “Vox”. Then she is taken down a peg and made to seem insane as her revolution becomes legitamate. Finally, she is neatly demonize, disposed of, and never had any real connection to the plot.

I found the final confrontation with Daisy one of the poorest design choices in this game. You can hear her shouting at you as you try to reach her, at this point she is clearly your enemy, and committing morally questionable actions.

In her final scene she is murdered by Elizabeth as she is holding a gun to the head of a white child. This is the first time Elizabeth takes a life (directly) in the game. Multiple things happen here that disturb me.

1) Daisy is seen as manipulative. She is being drawn as a parallel to Comstock. Only difference is, after her death she is NEVER MENTIONED AGAIN. She is entirely dismissed, even as she dies, the camera (Booker’s gaze) doesn’t look twice at the body or the child, it pans up to see Elizabeth losing her innocence.

You literally kill her and wipe your white hands clean of her black-liberation-agenda and that whole storyline is never seen again. Religious undercurrents, still a thing. Racism? Apparently suppress black liberation and everything is A-OK. I felt this was NOT OK.

2) Elizabeth loses her innocence. Why is this a major plot point? This woman has been throwing you shot gun ammo and watching you sky-hook faces for hours now. We are infantalizing Elizabeth, saying you as her designated protector have failed in keeping her pure. I smell purity myth, this propagates the idea that woman are not capable of managing their own affairs, controlling their emotions, or making decisions. These stereotypes limit opportunities for women in the workplace, and place restrictions on their freedom in society. So again, I felt this was NOT OK.

I just want to wrap up with, yes you included a woman of colour in a position of power in your game. That is awesome, thank you. But the development and fate of this character is reflective on the systems of oppression that exists in society, and it would be amazing to have strong, successful, women of colour represented. Possibly even like a a role model or something….

Transgendered Play: First person shooter, if I have to be a guy don’t make me sexist

I believe your gender identity does impact the way you interpret a game.

I liked Elizabeth and I found her character charming and independent. I in fact identified with her more than Booker while playing. I wanted Booker to be squatting behind a crate throwing Elizabeth health packs.

And there were some moments where my immersion was shattered (notably the scene before the final battleship) where Booker tells Elizabeth to “stay behind” because it is “too dangerous”. That made me think, as a woman, if this next level is too dangerous for Elizabeth, then am I not welcome here either? No girls allowed? Oh wait, women are too weak and fragile to participate in fictional battles on a fictional airship in an entirely fictional game? So instead of enjoying the game I am worry about stupid sexism in a throw away dialogue line to show Booker cares for Elizabeth. Dear writers: In this situation, wouldn’t “Are you ready?” or “Be careful ok.” sufficed?

The Ending: It was shocking when I saw Fight Club. 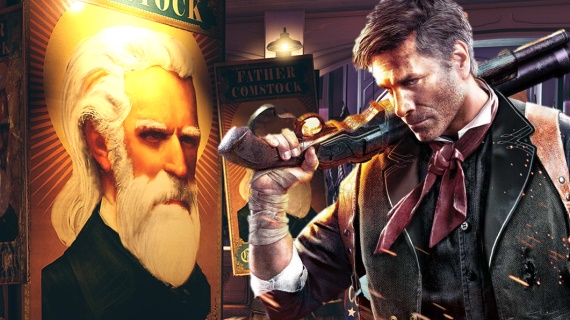 I am going to sum it up in one line:

Oh shit, Elizabeth is really not important and the narrative revolves around the white guy, surprise!

A more thoughtful response to elaborate on the above, I was really disappointed when as soon as Elizabeth gained power and knowledge she was killed, or rather never born in the first place. After talking to a few professors at my school, it can be paralled to the fate of many romantic ballerinas. Notably, Giselle – falls in love then dies, La Sylphide – tries to become human and dies, Swan Lake – falls in love and tries to become human and dies. In all of these tropes the woman dies as soon as she is or is going to be freed. This is also true of Elizabeth, she only tastes the illusion of freedom. This just illustrates that Elizabeth is merely an accessory to Booker’s story and allows women to be commodified, objectified, and placed under someone’s ownership.

Finally, In my dream-version of Bioshock Infinite, I think it would’ve been cool to open up the narrative to include more than just Booker and Elizabeth. Like, what if Elizabeth was never the girl at all? What if Daisy was actually Booker’s daughter? How would the writers have explored or explained that. How would her death be treated, or Elizabeth’s power be explained?

I was nice that everything wrapped up so neatly, but I felt it was at the expense of the female characters in the game.